The deep waters of Oatly Lake

A Swedish oat drink company finds an obscure lake in Michigan that shares its name. What happens when they finally decide to go there?

In the heart of the American Midwest, 30 miles east of Lake Michigan, there’s a town called Mesick. And in this Michigan town of 366 residents is a lake hidden in a dense cedar forest. The name of this lake just happens to be Oatly Lake. And for those who reached this web page by complete accident while in the throes of a deep internet wormhole, Oatly happens to be the name of our company. You’re currently on our website.

For most companies, unearthing a geographical coincidence like this would warrant nothing more than a brief conversation on a company Slack channel. But for us, it meant one thing: We must go there.

So, in September 2021, two Oatly employees, as well as a seasoned podcast producer (who would ultimately come to regret her involvement in this project), made the trek to the charming town of Mesick. We were on a “mission”--which is a euphemism for “questionable use of an oat company’s marketing dollars”--to answer all the burning questions one has when finding a lake with their name on it. Who owned this lake? Was there a connection to oat drink? Were there marketing opportunities to be had? Could it get us headlines in all the reputable trades?

We found answers to all these questions, though they weren’t the ones we expected. And although that last sentence makes it sound as if we’re foreshadowing a series of captivating events to come, we can assure you, we are not.

“It quickly became apparent that Oatly Lake is not a local attraction and, in fact, is not something locals seem to know about. They had also never heard of Oatly"

Downtown Mesick is a charming, roughly quarter-mile stretch of road that has all the necessities one could ever need: a post office, a coffee shop (tell “Brew Ha Brad” that Oatly says hello), a historical society (ask for Nancy), a couple restaurants, a handful of churches, lodging at the Mushroom Cap Motel and, of course, the Bucksnort Saloon. But it also has a few hundred residents who are more than happy to show you around. We arrived on a Friday and, in an effort to blend in, walked around town introducing ourselves in the least suspicious way possible: “Hi. We’re from a Swedish dairy-alternative company, and we came to Mesick because there’s a lake that shares our name.” It quickly became apparent that Oatly Lake is not a local attraction and, in fact, is not something locals seem to know about. They had also never heard of Oatly, the food company we represented, which was equally troubling because last year a highly paid marketing consultant told us we were a household name. This consultant called it “healthy marketplace penetration,” but apparently that did not include Mesick. This did not necessarily deter us from continuing on. 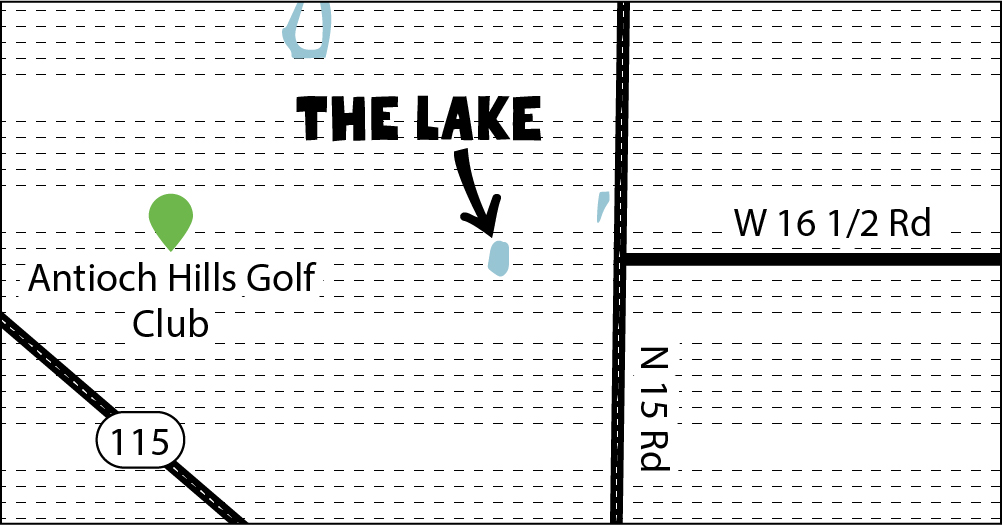 If you look closely at a map of Mesick, you’ll notice Oatly Lake is adjacent to Mesick’s Antioch Hills Golf Club. In fact, the 11th hole is only 100 meters from the edge of Oatly Lake, separated by a thick stretch of Michigan cedar trees. If you want to get close to the lake, you must first head to the golf course, which is what we did and where we met Michigan’s most hospitable greenkeeper, Todd Hoskins. Todd’s reaction to our story of discovering and ultimately visiting Oatly Lake was an indication that perhaps the body of water was not as magical as we had imagined: “There’s a lot cooler things to see in this world than a mud puddle in the middle of nowhere.” But in life, you choose to hear the things you want, and it was only after revisiting our podcast producer’s transcripts that we remembered Todd had said that. So, as we approached the 11th green, we were still buzzing with excitement.

The three of us will always remember the first time we set eyes on Oatly Lake. Not because we were in the midst of an existential crisis, questioning all the career choices that led us there, but because in actuality, Oatly Lake is pretty beautiful. It’s small--no bigger than a football field--and almost perfectly oval. It’s buttressed by towering trees, and its still waters perfectly reflect the Midwestern sky above.

Pretty soon, thanks to Todd’s infinite knowledge and generosity, we would be floating on the lake in a handcrafted pontoon alongside the lake’s owner, Justin Housler.

Antioch Hills Golf Club is not the only access point to Oatly Lake. The easier and more logical route is pretty evident if you know how to read a map. You head down West 16 ½ Road, make a right on North 15 Road, and continue until you reach a newly renovated cabin with a barn adjacent to it. This is Justin Housler’s property. Most people would be hesitant to welcome a group of random Oatly Lake-obsessed superfans rolling up with free oat-based beverages and last year’s Oatly swag. Luckily, Justin Housler is not “most people.” He greeted us with a big smile and a firm handshake--the kind of shake that makes you realize you’ve spent your life not shaking people’s hands firmly enough. Within minutes, Justin took us down a newly constructed path surrounded by swampy waters and the same trees we’ve mentioned three times already. We immediately cleared up a few things on the walk: The lake was not for sale, and Justin had never heard of our company. We also learned he has a boat. Two of these things were disappointing, but boats are cool, and within five minutes we were sprawled out on a homemade raft with the hum of the electric motor in the background, soaking in the sun on Oatly Lake.

We were feeling good...ish. There was no real story here per se, which the podcast producer had warned us of all along. And the prospect of any kind of newsworthy marketing stunt--a “takeover,” a sponsorship, an Oatly Lake pop-up store--seemed unlikely. But we had made new friends and seen nice places, and maybe that was enough. And it would have been, had we not uncovered a massive hole in the premise for this entire trip.

“Then Justin said something that gave us all, shall we say, a bit of pause."

While floating on Oatly Lake, the conversation naturally turned to the derivation of the name Oatly. It turns out that Oatly is a family name, and Justin is the proud descendant of the Oatly family. This lake--the one we had traveled quite far to see and had been floating on for three hours--was on the old Oatly homestead. Then Justin said something that gave us all, shall we say, a bit of pause: “It’s not even spelled the same, though.”

O-A-T-L-E-Y. That’s how the Oatleys have spelled their name for decades. As you can probably judge from the URL of this website, that is not how we spell our name. Which means this entire trip was based on a Google Maps typo. Yes, a typo.

There’s no way to predict or prepare for many of life’s unexpected moments. But this particular moment could have been predicted with a series of phone calls and internet searches, and we could have “prepared” for it by not going to Mesick. Is there a lesson here? Probably not. Will someone lose their job because of this misguided adventure? It’s possible. But no one can take away the fact that in the heart of the American Midwest, 30 miles east of Lake Michigan, there’s a town called Mesick. And in this Michigan town is a lake hidden in a dense cedar forest. And the name of this lake just happens to be Oatley Lake. And Oatley just happens to be the name of our company, despite it being spelled just a bit differently.

More from our department of mind control

How can we feed more people using the same earth? Farmer Adam Arnesson and his colleagues decided to answer the question.

Resurrecting Oats in the US

And how a daring group of corn and soy farmers are bringing back the Midwest’s soil with an old idea.

One oat drink company's quest to train a new and inclusive class of Chinese baristas.